How Building Resiliency is Bully Prevention

Bullying is once again in the national news, with the report of a 12‑year old middle school student in Nevada who allegedly shot two fellow students and killed a beloved teacher. Reports from fellow students indicated this young man was likely the victim of severe bullying. Sadly, he not only shot others, but then he shot and killed himself. ** In this newsletter, I detail the connection between implementing recommendations from the resiliency research as a strategy to prevent bullying ** and I highlight some exemplary resources/programs that are connected to both building resiliency and preventing bullying. 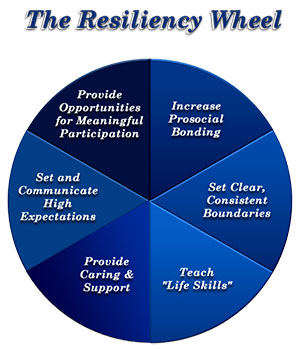 The National School Climate Center reports that in some communities over 50% of students do not feel safe in school; one in three reports being bullied; and “the entire school community is affected by the negative behavior of even a minority.” AND, the NSCC reports that their research shows that students “consistently rate school safety as a severe problem.”

AND a #1 research‑based strategy to combat this problem is DEVELOPING A POSITIVE SCHOOL CLIMATE. What is a positive school climate? Key components vary slightly between studies. Generally, however, they can be summarized as:

A 2013 research brief on the crucial role of school climate released by the National Education Association concludes:

READ MY ARTICLE ON THE CONNECTION BETWEEN BUILDING RESILIENCY, REDUCTION OF VIOLENCE, AND ACADEMIC SUCCESS

Here is my pick for the best program that builds resiliency and reduces bullying…and some other important resources:

The California organization “Community Matters” is my #1 pick for offering strategies that reduce bullying and build resiliency.

The approach of Community Matters is “an inside‑out approach” that involves utilizing all students in the school as resources for solving the bullying problem — which also increases student resiliency by communicating HIGH EXPECTATIONS, providing OPPORTUNITIES FOR MEANINGFUL PARTICIPATION, increasing PRO‑SOCIAL BONDING, setting CLEAR AND CONSISTENT BOUNDARIES and teaching THE LIFE SKILLS NEEDED for all students to be involved in solving the bullying problem.

Community Matters also concludes that a positive school climate is the foundation for a successful solution to bullying:

“To successfully implement and institutionalize the Inside-Out Approach requires a commitment to utilizing school climate as the foundation-the ‘bricks and mortar’-for building a safe, thriving and high-performing school.”

The core of the Community Matters approach is its Safe School Ambassadors® Program, which utilizes students as the resources to change the school climate in a way that stops bullying.

“Research shows that 70 to 85 percent of students have been passive bystanders to peer mistreatment. Most often, they do not intervene because they fear retaliation or don’t know what to do or say. At its core, the Safe School Ambassadors program is an ‘inside‑out’ approach to improving school climate, one that relies on social norms change and the power of students to help stop bullying and violence.”

The Safe School Ambassadors® Program is… “The nation’s most effective bystander education program [that] harnesses the power of students to prevent and stop bullying and violence. It is research‑based, field tested, and proven – by more than 60,000 students in nearly 1,200 schools in the United States and Canada – to reduce incidents of bullying and cyber‑bullying, promote academic excellence, and improve the overall school climate.”

Learn more about the SSA Program by clicking HERE

*Just working each year to improve school climate, in and of itself, will help reduce school violence, according to a growing body of research.*

Here are some excellent school climate surveys/initiatives (with links to these resources):

"Your training was superb. It's been quite some...